The Secretary of State for Biodiversity visiting Pelagis 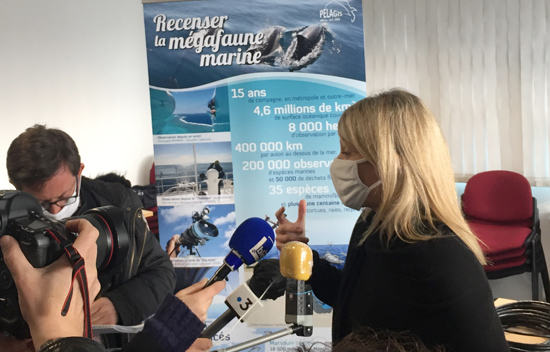 On Thursday 17 December 2020, the PELAGIS Observatory of the University of La Rochelle received Mrs. Bérangère Abba, Secretary of State for Biodiversity for the Minister of Ecological Transition.

The Observatory was able to present its activities in favour of marine mammal conservation in the presence of Mrs Stéphanie Thiébault, Director of the CNRS Ecology and Environment Institute, Mr Pierre Dubreuil, Director General of the French Office for Biodiversity and Mr François Houiller, President and Director General of IFREMER.

At the end of a meeting lasting nearly three hours, which allowed for lengthy exchanges on the issue of incidental catches of common dolphins in the Bay of Biscay, an agreement was signed between these various stakeholders to formalise their commitment and cooperation with a view to better understanding this phenomenon and to reflect on the means to be implemented to remedy it.

The central role of the Pelagis observatory in the study of French marine mammal populations and in supporting public policies for the conservation of marine biodiversity was thus reaffirmed by the signatories of this document.