Why so many stranded whales? 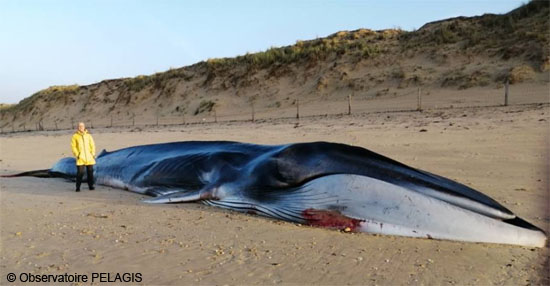 Since the beginning of autumn 2020, the PELAGIS observatory has counted 7 whale strandings on the French Channel-Atlantic coast: 3 in the Channel, 4 in the Vendée and one in the Charente-Maritime, 6 are fin whales (+ 1 tropical whale see dedicated news)

Each one was an adult or sub-adult fin whale (10 to 18 m), quite fresh. Examinations revealed haematomas on the belly and appendages, indicating agony at the coast, as well as extreme emaciation.

They also showed no apparent injuries. No internal or external traces of collisions with ships or entanglement with fishing gear were found, which rules out direct interaction with humans. On the other hand, a pathology and/or a disturbance of the marine ecosystem seem more likely.

Histological and virological analyses are underway with the first results being negative (including for influenza and SARS-CoV-2) and morbillivirus is strongly suspected.

Each year, a few individuals strand on our shores and 2020, although atypical, is comparable to 2004-2005 and 2019 when 7-8 whales stranded, compared to two to three times less in normal times.

The hypothesis retained for the moment to explain this phenomenon is based on a disturbance of the ecosystems that could be linked to a set of factors including the degradation of food resources that are very dependent on oceanographic conditions. This could favour the development of pathogens (morbillivirus type) and harm cetacean populations.

In the Bay of Biscay, off the French Atlantic coast, the fin whale population has been estimated at 8 000 individuals. Recent strandings do not seem to be problematic for the survival of the species. However, it remains difficult to assess the real extent of the mortality.